3 Methods to Solve 2-by-2 Systems of Linear Equations 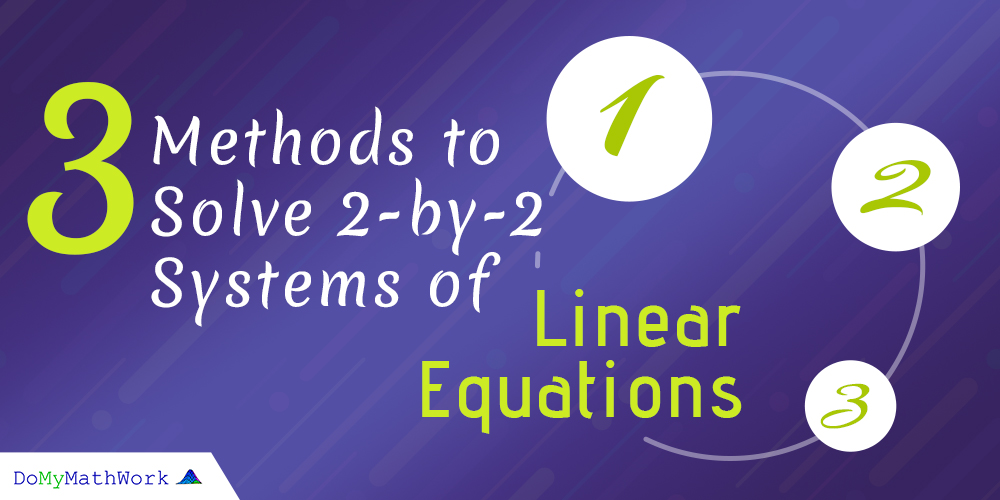 where A1, A2, B1, B2, C1, and C2 are given numbers and x and y are unknowns, and the goal is to find values for x and y that satisfy both equations.

Some of you may feel that solving such a system of equations is difficult. But if you have basic algebra skills, then you can solve these systems easily.

What solution in mathematics can you use to solve a 2-by-2 system of linear equations? Well, any one of the following three:

• In this method, you have to first make x the subject of one of the equations. For example, let’s solve the system 4x+2y=8 and 5x+3y=9. Begin by making x the subject of the first equation.

• Next, you have to plug into the other equation the expression for x you just obtained. Incidentally, it is this act of substitution that the name of the method is describing.

• Notice that we have reduced the original 2-by-2 system to a 1-by-1 system! Next, solve this reduced system for y.

• Last, you must plug the value of y you just found into the expression with x as subject, and solve for x.

• Next, solve the reduced system for x.

• Last, plug the value of x you just found into one of the original equations, and solve for y.

Using the graphing method to solve a 2-by-2 system of linear equations is recommended when all you need is a speedy approximation of the answer. In this method, you will have to plot the graphs of both equations in the system on the same coordinate plane. Then, you must find the point where the two graphs intersect and estimate the x and y coordinates of that point. The values of the coordinates will be the (approximate) solution values of x and y for your original system of equations.

In order to graph the equations, you may use a math problem solver online, or you can simply plot the points (0, C1/B1) and (C1/A1, 0) on graph paper and connect them with a straight line, and then do the same for the points (0, C2/B2) and (C2/A2, 0) on the same coordinate axes. Note, the first option for graphing is better if the online math problem solver that you use is a step by step math solver, because then you will be presented with automated explanations at each step of the graphing process.

The three methods used to solve 2-by-2 systems of linear equations are the Substitution Method, the Elimination Method, and the Graphing Method. In order to select the most appropriate method to use, be sure to first determine whether or not any of your variables have coefficients that are equal in magnitude, and whether or not you need an exact answer.

The coronavirus pandemic has disrupted life as we know it. The social distancing that has...

Quadratic equations have the form, ax2+bx+c=0, were and are given, and are sought. There are...

Want someone to do your math homework successfully?

Usually, students consider math to be difficult, so when a teacher assigns them homework, they...